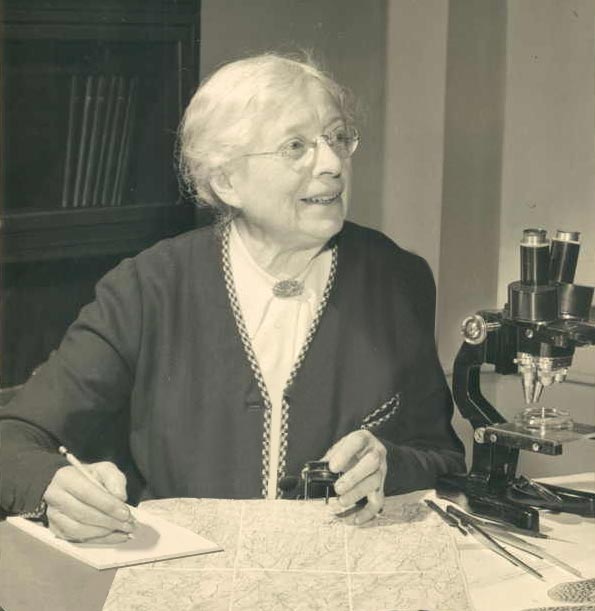 I first became aware of Emmeline Moore in the 1950s when I was in charge of conducting a number of water pollution control water classification surveys in the central New York area. This came about due to our dependence on and use of the surveys she conducted in the 1920s and 30s. These surveys showed the stream identification system used, which we followed. They identified the main sources of pollution and the physical, chemical, and biological condition of the waters at the time of the surveys. These documents were invaluable to us and greatly simplified our assignment. The respect that I developed for Emmeline Moore in those years led me to suggest to the association Awards Committee that they create an award in her name, and they are in the process of doing so.

Emmeline Moore was born in Batavia, New York, in 1877. She attended Geneseo Normal School (now SUNY Geneseo), graduating in 1895. She taught at the normal school and then went to the Cape Colony in South Africa as a substitute teacher of botany at Huguenot College. Upon her return to the United States, she enrolled at Cornell University and earned a B.A. in 1905, followed by an M.A. at Wellesley College in 1906. She taught botany and later became a professor of botany at Vassar College. She was also a summer investigator for the U.S. Bureau of Fisheries. This was followed by further study at Cornell, where she received her Ph.D. in 1916 in biology. A news item in the Rochester Democrat and Chronicle carried the following news item:

Penn Yan, July 21, 1915 – Miss Emmeline Moore of Churchville, N.Y., Ph.D. (student) Cornell University and an instructor in botany at Vassar College, passed through this village yesterday afternoon in an automobile en route to Lakes Waneta and Lamoka to spend some time in the investigation of water plant and weed life for which these lakes offer unusual opportunity. Miss Moore fishes with a long handled rake or grappling device from a flat bottomed boat, and usually locates her prey at a depth of fifteen feet or less. (Comment: the reporter appeared to be slightly confused over fish or plants.)

Based on this news story I would presume that she was working at Cornell’s New York State Agricultural Experiment Station in Geneva, New York, and traveled from there to Penn Yan. After receiving her Ph.D., Moore worked on a U.S. Bureau of Fisheries project on the primary food relations of fish from 1917 to 1919. This led into her primary career work as a research fisheries scientist. She became an honorary fellow at the University of Wisconsin in 1919.

In 1920 she became the first woman biologist for…. read more about Emmeline Moore here.